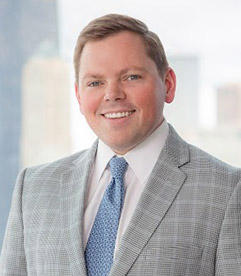 JJ Foley is the Chief Financial Officer of Madison IAQ.

Most recently, Mr. Foley served as the Senior Director of Investor Relations at GE. He was responsible for communicating the company’s strategy and value to the investment community, while working as a key partner and resource to GE’s Chief Executive Officer and Chief Financial Officer.

Previously, Mr. Foley was the head of Financial Planning & Analysis for GE Aviation, a business generating over $30 billion of revenue, $6.5 billion of operating profit, and $4 billion of free cash flow. He led the consolidation and reporting of the financial statements as well as the forecasting and budgeting initiatives. He also served as a strategic partner to the Aviation management team, driving operational improvements and supporting investor and executive communications.

Over a six-year period within GE’s Corporate Audit Staff (CAS), Mr. Foley held roles with increasing responsibilities. As the Operations Leader for CAS, he was responsible for the planning, execution and reporting of audits and operational excellence/simplification projects. In this capacity he engaged with GE’s Board of Directors. As an Executive Audit Manager, he oversaw teams of more than 70 auditors for GE’s Power, Asia and Services businesses. Beyond leading and executing numerous worldwide audits and projects across GE Industrial and GE Capital over this time, Mr. Foley was also known for building collaborative and energetic teams and developing rising talent.

He received a Bachelor of Science in Finance and Accounting from Marquette University.