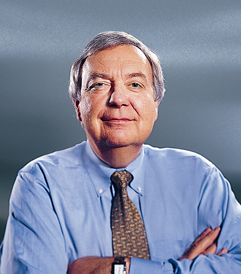 In 2014, Mr. Buffett asked Mr. Ptak to lead a team to acquire Duracell from Procter & Gamble.  Today, Duracell is expanding, with $2.2 billion in revenues and significantly improved profit margins.

Mr. Ptak has served on many corporate boards, including Morningstar, Inc., Snap-on Incorporated, General Growth Properties, Inc., Hon Industries, Heller Financial, Inc., and Kemper Insurance.  He served on the Board of Directors of World Business Chicago and Junior Achievement of Chicago as well as on the Civic Committee of the Commercial Club of Chicago.  He is a past member of General Motors and Ford Motor Supplier Councils and served on the Board of Trustees of Manufacturers Alliance (formerly MAPI).  Mr. Ptak graduated from DePaul University.